Over the Misty Mountains by JRR Tolkein (The Hobbit) 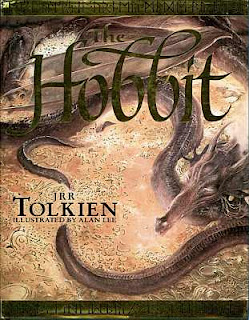 The Hobbit will be coming out at some point, and the thing is - ever since I can remember, I've had these opening credits running through my brain - Smaug devastating the dwarven keep, and flying off down river - his flames turning the water to gold.  Of course this would be accompanied by rousing chanting/singing possibly by the Samoan choir they used in LOTR, and using lyrics from Tolkein's Under the Misty Mountain.   (& preferably not the popular dwarven chant "Gold")

Of course much of this backstory is actually told later in the book, long after the poem - but in a movie it's surely better off upfront with the credits rolling after the fire hits the screen in full tacky 3D.  (Of course I never envisioned that - I mean back in the day 3D was the tackiest, I think my young self would have had an appoplexy ;)  Possibly, though, with the fact that the Hobbit will actually be two movies, maybe they'll leave Smaug's devastation until part two.  I guess so long as that Dale burns, the river turns to golden fire and Smaug looks like he belongs up in the air, dangerous, terrifying and almost elemental - then I'll be happy.

In fact talking about it, I realise some of the details of my little movie are blurring - what a shame, I'll just have to read the book again before I watch the movie.  It's been a long time since my children were seven and "The Hobbit" was the bed-time book of choice, and we were quoting vast chunks of  "here am I, naughty little fly..." Now the bed time reading is serious alone time featuring things like George RR Martin and Brandon Sanderson, and other such unwieldy epics  (ignoring the cute little cat books and the devastatingly off-putting reading logs).  So it will be sweet to get back to my favourite book of all time.

I am so looking forward to the movie.  The LOTR people may bee playing with my favourite book for over thirty years... but they played LOTR pretty well, and even when I thought their choices were wrong it was still obvious that Tolkien's books had been treated with love and respect.  So bring on the movie.   And bring on the dragon, enter top right screen, turn toward us up the river and let those flames erupt!

And don't forget to read Over the Misty Mountains,  it has to be amongst Tolkein's best poems, not that I'm biased or anything.  But the rhythm is compelling.  I also feel compelled to add just the end of the shorter little ditty that Bilbo's cheekily sings to the spiders of Mirkwood...and I'm probably paraphrasing here and getting it wrong anyway..."here am I naughty little fly, you are fat and lazy, you cannot catch me though you try, in your cobwebs crazy."  It's so perfectly catchy for young uns.

FYI.  The book cover shown is the same copy I read to my children when they were smaller, illustrated by Alan Lee it is quite charming and has survived a lot of reading!

Email ThisBlogThis!Share to TwitterShare to FacebookShare to Pinterest
Labels: Alan Lee, Fly, LOTR, over the misty mountains, The Hobbit, Under the Misty Mountains 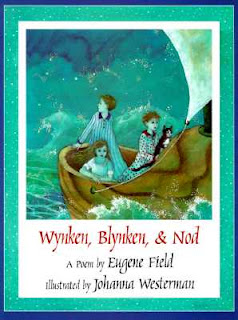 Wynken, Blynken, and Nod one night
Sailed off in a wooden shoe---
Sailed on a river of crystal light,
Into a sea of dew.
"Where are you going, and what do you wish?"
The old moon asked the three.
"We have come to fish for the herring fish
That live in this beautiful sea;
Nets of silver and gold have we!"
Said Wynken,
Blynken,
And Nod.

The old moon laughed and sang a song,
As they rocked in the wooden shoe,
And the wind that sped them all night long
Ruffled the waves of dew.
The little stars were the herring fish
That lived in that beautiful sea---
"Now cast your nets wherever you wish---
Never afeard are we;"
So cried the stars to the fishermen three:
Wynken,
Blynken,
And Nod.

All night long their nets they threw
To the stars in the twinkling foam---
Then down from the skies came the wooden shoe,
Bringing the fishermen home;
'Twas all so pretty a sail it seemed
As if it could not be,
And some folks thought 'twas a dream they 'd dreamed
Of sailing that beautiful sea---
But I shall name you the fishermen three:
Wynken,
Blynken,
And Nod.

Wynken and Blynken are two little eyes,
And Nod is a little head,
And the wooden shoe that sailed the skies
Is a wee one's trundle-bed.
So shut your eyes while mother sings
Of wonderful sights that be,
And you shall see the beautiful things
As you rock in the misty sea,
Where the old shoe rocked the fishermen three:
Wynken,
Blynken,
And Nod.


I was cleaning out the house and going through the bookcase  when I found a beautifully illustrated book of a poem I have loved since my childhood.  So of course I rushed to the net to see if there was much variation.  Apparently not.  Nobody seems to be able to better the original, and I would have to agree, it is truly beautiful.  The edition above was published when my daughter was born.  So of course, just like her - it's extra special :)

The poem has such a lovely rhythm and tone and contains truly beautiful fantastic elements that it's hard to believe it was written over a century ago.   Originally published under the title "Dutch Lullaby" - presumably because of the shoe.

vibrating upon the invisible thread
around and around 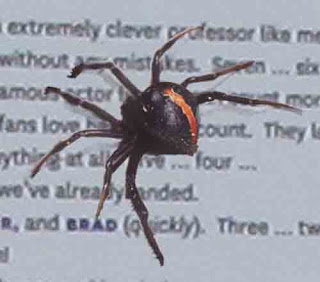 Now spiders should always understand subtext.  After all I'm sure Charlotte did.  Which is possibly why they do so well at hiding in it.  This spider (a cute little katipo) isn't bothering to hide, but I can assure you the little house spider that dropped onto my page the other day, sure did.

Dancing with the Devil to the tune of Lord of the Dance.

If this poem/song stops in a strange place - you're not seeing all of it, just click on the title. 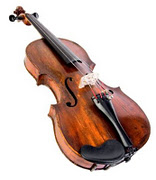 I asked for peace
And he gave me blood
For the dead don't fight
And they do not hold a grudge.
I asked for money
And I asked for fame
Now I don't want either
I've lost far more than I gained

Yes, dancing with the devil
will get you every time.

Alright so it's not a "real" poem this week, just a bit of fun.  I haven't actually tried it with the music yet.  Must have a go sometime to see how close it is. :)
For more poems, why don't you check out the Tuesday Blog?  There's always a poem up for the week, and some fantastic award winning poets on the side bar to check out.

Have a great week.
A.J. Ponder