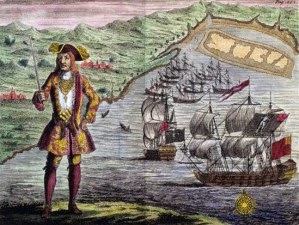 This week was one of those weeks where Tuesday creeps up unawares, and while looking for poetry, found myself distracted.

They breached the - I am looking for a poem - defences - by tantalising me with swashbackling poems of antiheroes  that remained forever out of reach. Yes, there are a few cute kiddy poems, but I was in the mood for an epic.

I know they're out there, but google keeps on washing me up on lonely shores. Sometimes if you want something, you just have to write it yourself, I guess. So maybe next week. That'll certainly keep me busy.

Have a great week everybody and I hope you enjoy the poems on the Tuesday Hub,

Apparently the Dread Pirate Roberts is real. Born John Roberts, it is thought he changed his name to
Bartholomew, after Bartholomew Sharp of, The Dangerous Voyage And Bold Assaults of Captain Bartholomew Sharp and Others,by Basil Ringrose London, 1684.

So (third mate) Bartholomew Roberts, his ship captured by pirates in 1719, took to a life of piracy.   "Since I hath dipp’d my Hands in muddy Water, and must be a Pyrate, it is better being a Commander that a common Man."

Of course he died. He was a pirate, but his name lived on. (Kind of, he is often known as Barti Ddu, or Black Bart, which he was never called during his lifetime)

There were Turkish Delights,
I remember that much
smothered in icing

Once tasted
Almost all else is forgot

Each heart beat a sliver of
icy anticipation

and lakes to skate across
I remember flying,
and falling

Do you remember?
I think there was a time
called Green.
And everything was Spring

Hey people, only a little late, and I dare say might come back with a couple of tweeks in a week or so. But here it is - my little Frozen poem, borrowing a little nostalgia from a few places, but mostly Hans Christian Andersen's Snow Queen and C.S. Lewis' White Witch of Narnia.


Hope you all have a great week and enjoy the Tuesday Poem Hub
The poem I enjoyed most this week was Touch, by Michelle Elvy, up here on Helen McKinlay's blog (another of my favourite poets - it's too hard to pick just one)

P.S This poem got the seal of approval from a huge Elsa / Frozen fan - even though it mostly references earlier versions of the fairytale - so I'm very happy :)

Tuesday Poem: One more thing - or- Once More Unto the Breach, William Shakespeare

Ok, I chose this "poem" this week because it seems to always be one more thing taking up my attention, and then I can get on with my real job of writing. Even though I know that sort of approach never works. Writing first I say. Writing first. Everything else second. (Except family in dire need. But that goes without saying).


Time to write some books. That's what brings the lustre to my eyes. Seriously, I'm finally starting to appreciate Shakespeare...as being hilarious.  So now the game's afoot..


Why not kick back and find some inspiration or simply enjoy the poems on the Tuesday Hub?

Officially, officially, Lost in the Museum is Launched and Online

I'm excited to say Lost In The Museum is now officially, officially launched. There's even a picture from our amazingly successful launch at the New Zealand Science Fiction Convention (even though Dave Freer isn't a contributor, it's the only picture I have of Lyn McConchie, & besides, Dave Freer was amazing, he's said he may contribute to another anthology, so looking forward to that!)


So I'm kinda sad because it's the end of an era, but mostly excited, because so many new projects are now on the horizon. Looking forward to the excitement of creating more worlds, Lilly Lionheart, another Wizard's Guide, Twisty Christmas Tales and more... :)


Lost in the Museum is available on Amazon and all good NZ bookshops including Children's Bookshop Miramar.
Retrospace in Auckland and should soon be available from Unity Books as well. The ISBN is 978-0-473-28320-9.

A.J. Ponder
Author of Quest, Prophecy, Omens, Miss Lionheart and the Laboratory of Death, Wizard's Guide to Wellington, Attack of the Giant Bugs - a You Choose Science Adventure, and The Frankie Files

It's the first stumble
the gasped
breath

It's the rushing
falling, spinning
world

it's the impact
burning skin
bones-

knowing the worst
is yet to come.


Alright couldn't let another week go without a poem. Sorry, it's another cheery one, desperately want to go back to fairy tales, butapart from my gorgeous daughter in her "Frozen" glory... Still maybe that will be a good theme to try and explore next week.

Have a fantastic one
and why not check out the Tuesday Poem Hub?
cheers,
A.J.