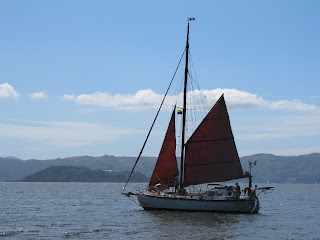 it's a hard life,
and we can hard-tack it
it's a free life
so you can unpack it-

Harden up, and pay me my money down
jibe-ho, harden up to the wind
But there at the port, the Jollies are waiting
jibe-ho, tack away from the shore

yeah it's a free life,
and we can free-wheel it
it's a short life
and we can die dancing
you take the cutlass
and I'll take the claymore
with a sword in the gut
and at least we'll die free

Harden up, and pay me my money down
jibe-ho, harden up to the wind
For there at the port, is a noose that is waiting-
yeah it's a free life
as free as the rope hangs
it's a good life
albeit a short one
it's a hard life,
and it's better than starving

jibe-ho, I'm not much for dancing,
but I'm hard now, harder than sin,
jibe-ho, we paid down our money
to dance on the head of a pin.

Alright, as promised, Dancing Pirates.  I'm wondering if I should give a glossary...


Everything you could possibly need to know about pirates, except a lot less.

Many pirate ships had a code of conduct, known as articles of agreement, often romanticised as the pirate code, harden up is turn toward the wind, sail closer to the wind, the phrase I'm really sad about not managing to shoehorn is is to splice the mainbrace which, surprisingly enough, is to issue the crew with a drink.  According to Mirriam Webster a jibe is: to change a vessel's course when sailing with the wind so that as the stern passes through the eye of the wind the boom swings to the opposite side, which explains why Jibe-ho is the warning that the boom is swinging across the centerline, when a ship is jibing (gybing).

I hope you  enjoyed the poem, and now, instead of the more traditional angels, I'll hope you'll ask the burning question - how many pirates can dance on the head of a pin?

P.S. Articles of Faith PArt 1 and 2 are here http://anafflictionofpoetry.blogspot.co.nz/2015/05/articles-of-faith-part-1-pirates-life.html
Posted by AJ Ponder at 12:19 PM 1 comment:


Hey Jollies,
it's a pirate's life we wanted,
with ne'er enough rum
to splice the mainbrace,
although our articles
were a work of faith,
when the land
was ruled by golden sharks.

Hey Jollies
it's a pirates life we live,
with never enough rum
to splice the mainbrace,
as our articles,
are pitched,
and long broken,
against a tide of green


while we dance silent and
barefoot amongst the flotsam,

and the gaping jaws of monsters
bellowing loud enough to break the heart...

Part 2: How Doth the Deinosuchus

How sadly doth he sympathise
How neatly spreads his claws
And welcomes all the foolish in
With gently smiling jaws.

More pirates next week. Dancing Pirates. I hope. The last part of Articles of Faith - which is about right, because it's an act of faith, given all I have right now are notes, despite having had this one on the back-burner for a while.

Moreover, I hope you enjoyed the reference to Charles Dodgson's work. I've always taken by How doth the Little Crocodile. So much so, I think it was the first poem I ever learned by heart. Although I suspect that the main consideration was the length, the warning of lurking danger in apparent beauty never gets old. Watch out little fish, and have a good week!

P.S. Articles of Faith Part 3 is here at http://anafflictionofpoetry.blogspot.co.nz/2015/05/articles-of-faith-part-3-dancing-pirates.html