The boys are restless,
Māui-tikitiki-o-Taranga
And his brothers
Treading lightly
Enough for atua but
Creating the tiniest crack --
A devastating splinter
For mere mortals.
And we watch in fear,
Those who infest the fish.
We watch and listen from afar -
"Kauaka tikoki e te waka"
Knowing your music is
You                  Not ours.
are
shocked.
All are shaken,
overwhelmed, relieved,
for, in this place we hold life is sacred.
Families, friends, the cleanup crew,
no one forgets the North waits
for Maui to
carve
the fish
we
pretend
is
land


I felt the earthquake was the province of people who had lived through it. That raw emotion belongs to you who lived through it and are still living through the aftershocks. Still something like this doesn't pass anyone in New Zealand by, we all know people who are affected, so this was my take, a little late. Hopefully there's some kind of balance with North and South -- apart but together. Also if anyone speaks Maori feel free to tell me if I've stepped wrong. I was using online dictionaries for hours to try to get the phrase "don't rock the boat". Which was a bit of an eye-opener, because I thought it would be dead easy. And it wasn't - a bit like the shape itself. :)

PS if you want to know about quakes in your corner of New Zealand - why not check out GeoNet? It can give you updates, either choose your region or check out the overview. 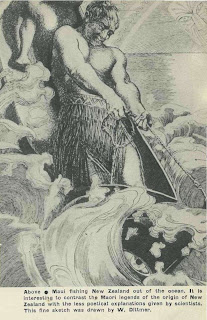 My mother said, I never should
Play with the Gypsies in the wood;
If I did, she would say,
Naughty little girl to disobey.
Your hair shan't curl,
Your shoes shan't shine,
You gypsy girl, you shan't be mine.
And my father said if I did,
he'd rap my head with the teapot lid.

The wood was dark, the grass was green,
In came Sally with a tambourine.
I went to sea - no ship to get across,
I paid ten shillings for a blind white horse,
I up on his back,
and was off in a crack -
Sally, tell my mother I shall never come back.

Another old favourite.  This poem has the allure of the forbidden.  It moves and dances with its own freedom, as it develops from repression to mystery and new beginnings.

Growing up in New Zealand the idea of Gypsies seemed as exotic and enticing as fairies and I have to admit I was surprised to find that this poem wasn't so easy to find as I thought.  There was nothing in particular dedicated to it, just some blogs with versions that didn't seem quite right.  This mash-up seems to be the closest to my rememberings although I'm sure other people will have their own favourite versions.

Email ThisBlogThis!Share to TwitterShare to FacebookShare to Pinterest
Labels: Gypsies, horse, I never should, mother, My, My mother Said, said, tambourine

Believe it or not, it's New Zealand SpecFic Blogging week. So I thought how about a little homage to the Lord of the Rings film in the hope that The Hobbit will eventually materialise.  (I'm dying to know if they are going to open with the scene of Smaug I've always imagined.)

I have a tale to tell to you,
A tale of woe and endless rue
Of dark things stalking in the night
and brave men come to do what’s right

For these things I long, and many more
but to walk until I get footsore
And I absolutely swear
a dozen steps to get nowhere…

I’d do it all again for

ok maybe it's not pure spec fic but here's some others - one or two of which might be considered Spec Fic - hey what do I know?  I just write stuff.


SpecFic POEMS
Time Wyrm - The crack in the universe expanded
Kaitoke - 'nough said.
The Fair Folk by William Allingham
Ecila - I'm sensing a pattern.  A certain someone falling down the rabbit hole.

As You know Bob - prose poem by Tim Jones
Books in the Trees - Tim Jones.  Not actually a poem but definitely a fun read.
I know there are so many others but the slipper just fell off and the pumpkin is leaving.

hundreds of SFFANZ book reviews (some of which will be NZ)

Elizabeth Knox (with Helen Heath, 10 Questions series)
Posted by AJ Ponder at 12:02 AM No comments:

Your poem sat
watching the world
under your window,
sitting on your sill
serene as spiced coffee,
scarf wrapped
round and about,
nothing poking out,
but scratching toes,
a cold nose,
and thump,
a tail.

I suspect this is Mel's and my little in joke - but sometimes it's the little things that count. Sometimes that's all we have, especially in times of upheaval or worry. So here's to all those people in Christchurch, we don't know what you are going through, but we've seen some of the devastation and our hearts go out to you.

Cheers, everybody.  Best wishes.
Posted by AJ Ponder at 12:42 AM No comments: