The Walrus and The Carpenter by Lewis Carroll

The sun was shining on the sea,
Shining with all his might:
He did his very best to make
The billows smooth and bright--
And this was odd, because it was
The middle of the night.

The moon was shining sulkily,
Because she thought the sun
Had got no business to be there
After the day was done--
"It's very rude of him," she said,
"To come and spoil the fun!"

The sea was wet as wet could be,
The sands were dry as dry.
You could not see a cloud, because
No cloud was in the sky:
No birds were flying overhead--
There were no birds to fly.

The Walrus and the Carpenter
Were walking close at hand;
They wept like anything to see
Such quantities of sand:
"If this were only cleared away,"
They said, "it would be grand!"

"If seven maids with seven mops
Swept it for half a year.
Do you suppose," the Walrus said,
"That they could get it clear?"
"I doubt it," said the Carpenter,
And shed a bitter tear.

"O Oysters, come and walk with us!"
The Walrus did beseech.
"A pleasant walk, a pleasant talk,
Along the briny beach:
We cannot do with more than four,
To give a hand to each."

But four young Oysters hurried up,
All eager for the treat:
Their coats were brushed, their faces washed,
Their shoes were clean and neat--
And this was odd, because, you know,
They hadn't any feet.

Four other Oysters followed them,
And yet another four;
And thick and fast they came at last,
And more, and more, and more--
All hopping through the frothy waves,
And scrambling to the shore.


The Walrus and the Carpenter
Walked on a mile or so,
And then they rested on a rock
Conveniently low:
And all the little Oysters stood
And waited in a row.

"The time has come," the Walrus said,
"To talk of many things:
Of shoes--and ships--and sealing-wax--
Of cabbages--and kings--
And why the sea is boiling hot--
And whether pigs have wings."

"But wait a bit," the Oysters cried,
"Before we have our chat;
For some of us are out of breath,
And all of us are fat!"
"No hurry!" said the Carpenter.
They thanked him much for that.

"A loaf of bread," the Walrus said,
"Is what we chiefly need:
Pepper and vinegar besides
Are very good indeed--
Now if you're ready, Oysters dear,
We can begin to feed."

"But not on us!" the Oysters cried,
Turning a little blue.
"After such kindness, that would be
A dismal thing to do!"
"The night is fine," the Walrus said.
"Do you admire the view?


"It was so kind of you to come!
And you are very nice!"
The Carpenter said nothing but
"Cut us another slice:
I wish you were not quite so deaf--
I've had to ask you twice!"

"It seems a shame," the Walrus said,
"To play them such a trick,
After we've brought them out so far,
And made them trot so quick!"
The Carpenter said nothing but
"The butter's spread too thick!"


"I weep for you," the Walrus said:
"I deeply sympathize."
With sobs and tears he sorted out
Those of the largest size,
Holding his pocket-handkerchief
Before his streaming eyes.

"O Oysters," said the Carpenter,
"You've had a pleasant run!
Shall we be trotting home again?'
But answer came there none--
And this was scarcely odd, because
They'd eaten every one.

I love narrative poetry such as this - and yet although this is thought to be for children and perhaps simplistic, or not as sophisticated as more literary works and yet it manages to hold a number of truths that are just as relevant today as back then - and yet still hold warmth, humour, meter and rhyme.  A lovely piece of fun with a dark side -- so very Lewis Carroll :)


A.J. Ponder's work is available through Rona Gallery, Amazon, and good Wellington bookstores
Posted by AJ Ponder at 8:30 AM 10 comments:


Pen pressed to mouth with absolute intensity
you listen,
but there is nothing left.

My words
are
as empty
as the bare wastes of
concrete
our feet leave behind.

My friend, I cannot take us
so high
as to remove us from our folly.
I cannot even
pretend
to listen to the silence
your pursed lips create.

Whole deserts of meaning
bloom
and die,
as you describe the limits of my hubris
with rounded eyes.

So I need to know,
can the past be rewritten
with the dust
of broken, rotting bones
in the bleaching sun?

And will you, my student, forgive these truths?
or will we freeze forever
in this rarefied atmosphere,
waiting for this moment
to concrete.

No - not a beach poem (sorry Helen) that particular poem seems to have a problem within the confines of words.  I think maybe it is two poems and they need surgical separation.

That will be fun when I have a moment but today as a busy day so I'd better crack to it.   I'm so very behind - but I'll be doing my best to visit everyone at the Tuesday poem hub tonight.  Cheers everyone, have a great week

Eating Pyramids in the Desert

Take with a pinch of salt
and maybe a grain of sugar
then make sure the lie is big enough
so you, the consumer
can swallow it whole. 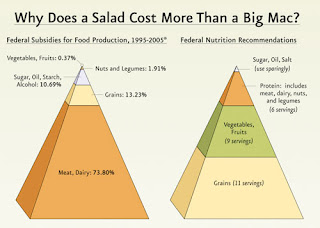 Oops - food pyramids - FYI never show me one of those things, they only upset me - but this picture in particular ticked me off on so many levels.  (Added 25 Feb: There are few food pyramids that can be taken seriously and but these have actually been created for people - instead of interest groups.  The African American Food pyramid and it can be found here  and the Mediterranean pyramid here they are different because they have resisted the pull of processed foods that have been promoted as "healthy" by interest groups.) 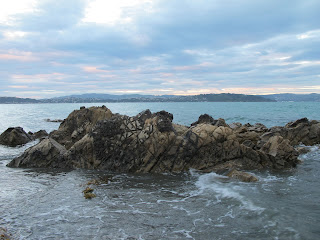 So, yes, I was going to do a nice beachy poem - after all as I walked around the bays today there was a traffic cone perched jauntily upon a rock - maybe I thought, Neptune needs a party hat, but he was kind enough to place it upon the shore later in the day.

Here's a nice picture of the beach instead.  Unfortunately I didn't have my camera with me so it is sans party cone.  For more Tuesday poems visit the hub - here.   My government and food lobby dis-approved suggestion is to search out "chocolate as a form of antidote.  Personally I rather like the smooth "Ode to Chocolate" by Barbara Cooker.

The Eagle by Lord Alfred Tennyson

He clasps the crag with crooked hands;
Close to the sun in lonely lands,
Ring'd with the azure world, he stands.


The wrinkled sea beneath him crawls;
He watches from his mountain walls,
And like a thunderbolt he falls. 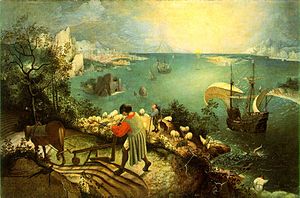 The analysis of this poem is both plentiful and varied.   I have nothing really to add except I happen to like it - the rhythm within the poem is quite beautiful but the ambiguous decisiveness of the last line is masterful.  :)

The picture is Bruegel's Landscape with the Fall of Icarus (ca. 1558) - I was really looking for a closer pic of Icarus - but this seemed most relevant.