Set-word poem in the style of AA Milne

As part of an interview on Lee Murray's blog - I wrote Gargantuan Season: a poem that only had one rule - include the words: mucus, daffodil, gargantuan... so


It’s Gargantuan Season again,
They’ll invade the daffodils
And then,


When you think you’re quite safe,
They’ll bite off your face
And leave not a trace -


I know it’s not great
To be left out as bait-
But at least there’s no mucus all over the place.

To see more of the strange questions Eli and I were asked - and the even stranger answers - why not go to Lee Murray's blog?

Have a great week people
A.J. Ponder
My Books for children are available online and through Rona Gallery

Great news: Attack of the Giant Bugs has been released 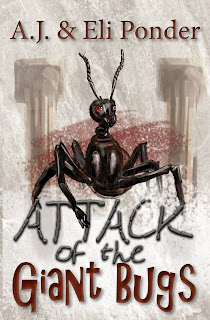 Yes, I know it's not poetry, but this is a fun book for eight to ten year olds, and Eli and I really enjoyed writing it.
Just this evening we were laughing about one of the endings. Yes, you have to make a deliberately silly choice, and it's a very silly ending...so I thought I'd let you have a little sneak peak. (below)
Warning: some of the book contains real science, and there's a little glossary of the insects used in the story at the back for people who are interested.

“Okay,” Frankie says. “Here goes.”
You can hear beeping from the other side of the rubble. The self-destruct starts talking. “Does not compute, twenty three minutes remaining, and counting.”
The others all exchange looks, but there’s not much time for anything else before a flash of sound and light hits your senses. When you pick yourself up off the floor, it’s hard to stand up.
And then you look down at your paws – PAWS!?!?! You squeak in horror. Somehow, you’ve been turned into a mouse.
Other mice are turning around and around in circles, squeaking in terror. Although a few are casually washing their whiskers as if nothing is wrong.
“Quick, this way,” a mouse says. You’re pretty sure it’s Frankie. She leads all the other mice through the rubble toward you and then makes a megaphone out of old posters and a bit of wire. It takes a bit of yelling through the megaphone, but the police do eventually come down to see what’s happening. Once they see the mouse yelling through the megaphone, they grin. A voice booms out very loudly. “We’d better send for Frankie’s mother.”
#
After weeks of living at Frankie’s house, drinking terrible potions and getting changed into rubber balls, strawberry plants and jellyfish, you’re all turned back into people.
Back at home, you receive a mousepad with a cat on it in the mail. On it are the words, I survived The Great Mouse Incident. Never Again. But in the end, it’s not so bad, because becoming a mouse made you discover your love of cheese. You move to France and become the best cheesemaker in the world, crafting all kinds of specialty cheeses. Royalty and celebrities are the only people who can afford your most expensive product, Crafty Cupcake’s Camembert. Each of these cheeses is worth a time machine. And that’s the best part, because there’s plenty more adventure to be had - by going back in time.
If you make different choices, you can blow up the entire museum, join the bad guys, or find your own mouse companion – a diabolical varmint who will plot revenge against you from under the kitchen cupboards.
For more adventure, click on this link to Amazon and take a peek inside (or buy the book, you know you want to --it's the perfect present for kids, and every sale helps Eli and I produce more fabulous books for the young - and the young at heart)
#
Have a great week,
A.J.Ponder


One of the authors and editor of Sir Julius Award winning Lost in Te Papa and Twisty Christmas tales, A.J. Ponder is a Sir Julius Vogel award winning author in her own right with Frankie and the Netball Clone taking out best short story. Obviously A.J. has a certain fascination with genius inventors as two of her most famous characters, Lilliana Lionheart and Frankie have that in common. She has a love of science, and a BSc hons to back that up, not to mention being married to Te Papa's Phil Sirvid, the museum entomologist and white-tailed spider expert.
AJ's books include Miss Lionheart and the Laboratory of Death, The Frankie Files, Wizard's Guide to Wellington, numerous school journal stories and plays, horror short stories for adults, along with science fiction, and the odd secret spy, and super-villain.
If you're interested, and have managed to read past the "please ignore" :) why not check out my profile on Amazon and see if there's anything I've written that you'd like?

Short story and sonnet published - find out how you can see it for free! 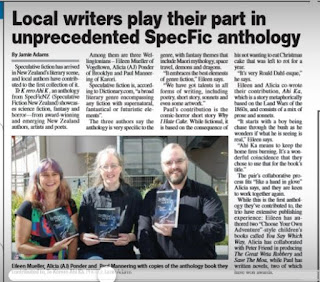 Eileen Mueller, Paul Mannering and myself in the Cook Strait Times. Our stories made it into a New Zealand speculative fiction anthology. It's a great organisation for genre authors, and well worth supporting. Two ways to support them and NZ authors is to join up - or buy their new anthology Te Kōrero Ahi Kā: To Speak of the Home Fires Burning. My story and sonnet, written with Elieen Mueller, is right in the front - so take a peek inside!

And there's even more news!
Another new book...but more on that tomorrow. (hopefully)


So have a great week, mine is looking ultra busy - which, I guess is what happens when you get a broken arm and life doesn't stop...