The Vampire by Rudyard Kipling

The Vampire
by Rudyard Kipling 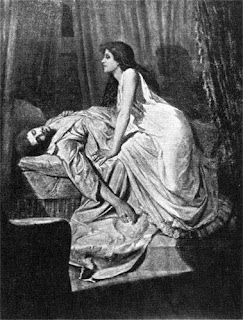 Oh the years we waste and the tears we waste
And the work of our head and hand,
Belong to the woman who did not know
(And now we know that she never could know)
And did not understand.

Oh the toil we lost and the spoil we lost
And the excellent things we planned,
Belong to the woman who didn’t know why
(And now we know she never knew why)
And did not understand.

It’s coming to know that she never knew why
(Seeing at last she could never know why)
And never could understand.

The poem was famously written as the result of this painting by Philip Burne Jones, but it seems some other factors might have caused a tiny undercurrent in the work.  Personally I rather like much of the parody by Felicia Blake, it begins:

And I will post the rest of that next week! :)

So in the meantime I am thinking of Rudyard Kipling as a man scorned and am tempted to find out more - but so much to do today...