The Final Happily Never After (Part 3)


If you're not sure what this - or how how intrepid heroes could have got this far - then check out the first edition of Happily Never After, and Happily Never After part 2 or we could kick start everything with the short version - but where's the fun in that?

The short version.   The Narrator is having a bad day.  He (or she) is angry the story-book characters are not behaving like they're supposed to.  They don't want to speak in rhyme and they certainly don't want to get married.  So the narrator's decided to conjure up a giant with the help of his magic book and get rid of these annoying characters once and for all...

And so with no further ado
The next section after part two:

NARRATOR turning page: Ahem.
Since our heroes would not wed,
The giant came and killed them --
JACK: Stop right there.  We don't want to die.
RAPUNZEL: And marry?  Never.
RAPUNZEL runs to NARRATOR and turns the last page of the narrator's book.
RAPUNZEL: Jack and Rapunzel become famous pilots and live happily ever after.
JACK: But--
RAPUNZEL: And they never get married to anyone.
JACK: Yay. Let's go!
JACK and RAPUNZEL run off stage.

GIANT (sniffing): But I'm still hungry -- and I can still smell the blood of an Englishman.

NARRATOR: How did you know I was English? 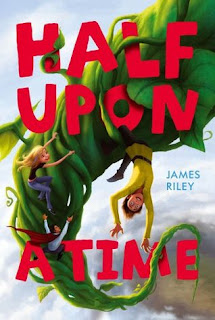 And so the end of our epic tale, the boards are bare,  the heroes have gone home for dinner, and thanks to these people for the book cover.  It's perfect.  (After all, I believe the giant is still chasing that narrator!)

Don't forget to always climb beanstalks when the opportunity presents.  Sometimes there may be giants, but more often I think you'll find geese with golden eggs and other such novelties.  So go on, go, and search for your treasures  at this your local beanstalk.  (Otherwise known as The Tuesday Poem Hub.)
Or this beanstalk leading directly to the Portal of Fairytale Poetry.

If anybody knows some I've forgotten, please message me (note, poems are in alphabetical order)

A.J. Ponder's books are available through Rona Gallery, Amazon, Paper Plus and good Wellington bookstores.
Posted by AJ Ponder at 7:30 AM