If you're not sure what this - or how how intrepid heroes could have got this far - then check out the first edition of Happily Never After - right here. 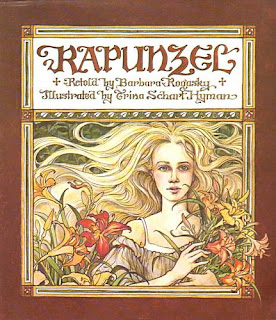 Otherwise, how about kicking back with the short version: The narrator is disappointed because his story is not quite going as planned - Rapunzel is refusing to be rescued on the grounds she'd rather stay with the witch, and  so sensibly she declines the extremely painful experience of having someone climb up her hair. Jack, the ostensible hero is somewhat relieved...

And so with no further ado:
Happily NEver After
Part Two

RAPUNZEL: And have him climb up it?  I told you -- I don't want to be rescued.
JACK starts walking away.
NARRATOR: So Jack the oaf went on his way,
no princess would be wed this day.
RAPUNZEL (waves): Thanks for not rescuing me.
JACK: Any time.  Dashing pilots never rescue people unless they really want to be rescued.
RAPUNZEL: A pilot?  I love flying, -- and broomsticks are so cold and uncomfortable.
RAPUNZEL jumps down off her tower and runs to Jack.
NARRATOR: What?
RAPUNZEL: Let's go.
JACK: Good idea.  Where?
NARRATOR turns page.
NARRATOR: Long our heroes walked and walked
to seek and find the huge beanstalk.
JACK and RAPUNZEL walk offstage.
NARRATOR: Then they climbed up, up, up, up,
until they reached the tip, top, tup.
JACK and RAPUNZEL walk onstage.
JACK: Gosh that was a terrible rhyme.  I think they're getting worse.
RAPUNZEL: I think you're right.
NARRATOR glares at the two heroes and turns the page.


NARRATOR: Fine.  Here's a giant for you to fight.
GIANT walks onstage.
GIANT: Fee, fi, fo, fum.
I smell the blood of an English-man.
JACK: English?  Do I look English?
RAPUNZEL: Man?  Do I look like a man?
GIANT: Boy on toast, girl on bread,
with just one bite you'll both be dead.
GIANT chases JACK and RAPUNZEL.
JACK: Oh no!  When the narrator turns the page, whatever he says comes true.
NARRATOR turning page: Ahem.
Since our heroes would not wed,
The giant came and killed them -- 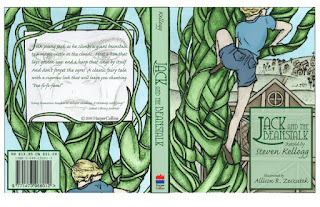 Or will the narrator manage to kill off his two less than accommodating lead characters?

Hold onto your glass slippers - keep your finger on the magic portal at the Tuesday Poem:(same magic portal, same magic time, same magic place if you don't want to miss awesome poems from New Zealand and all around the world)and hold your breath for next week's final exciting edition of Happily Never After.


Happily Never After part 3 - just a small magical twitch of a finger away....