Happily Never After: A play where the narrator plays with poetry 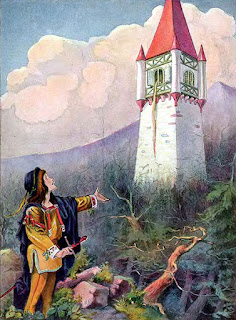 ok this probably deserves a little introduction - it's a play where the Narrator has got it in his/her head that rhyming is the order of the day...but nobody else quite has the narrators enthusiasm.

Happily Never After
by A. J.  Ponder

Scene: The NARRATOR is reading from a large book.  RAPUNZEL is in her tower.  JACK is walking onstage.

NARRATOR: Long ago and once upon a time,
Our hero Jack would speak in rhyme.
JACK: What?  No I don't, I want to be a famous pilot.
NARRATOR turns page.
NARRATOR:  Hmmm.  Jack didn't look where he was going, and fell into a puddle.
JACK falls over.
JACK: Ouch!  What do you think you're doing?
NARRATOR: Not rhyming.
JACK: You rhyme, I'll fight the monsters, ok?
Jack walks to RAPUNZEL's tower.
NARRATOR: Soon our Jack, so brave and bold,
found a tower of burnished gold.
RAPUNZEL (leaning out): That better not be some idiot prince come to rescue me.
JACK: No, definitely not.
NARRATOR: Jack go rescue the fair maid,
an evil witch has her afraid --
RAPUNZEL: That's not true.  Well, she is a witch, but only her cabbage stew is evil.
JACK: Yuk!
RAPUNZEL: Yes it's horrible, but on the up side she is giving me flying lessons.
JACK: Really?  Could I learn?
RAPUNZEL:  No.  Whoever heard of a boy riding a broomstick? Go away.
NARRATOR: Now Rapunzel, maiden fair,
Shouldn't you let down your hair?
RAPUNZEL: And have him climb up it?  I told you -- I don't want to be rescued.

And so (dramatic music) you will have to wait till next week to discover:
Will the fair maiden be rescued?
Will the narrator get the rhyming and romance they desire?
Or will Jack become the famous pilot he always wanted?
Hold onto your glass slippers -keep your finger on the magic portal at the Tuesday Poem:(same magic portal, same magic time, same magic place)

Or go straight to Happily Never After Part 2

and remember...
Sometimes its important to let down your hair. And sometimes its best not to let people climb up it - but when they do - I think P S Cottier's Rapunzel (here) has the exact right attitude ;)

Email ThisBlogThis!Share to TwitterShare to FacebookShare to Pinterest
Labels: Giant, hair, Happily ever after, happily never after, Jack, maiden, narrator, once upon a time, play, poem, Rapunzel, rescue, rhyme, witch